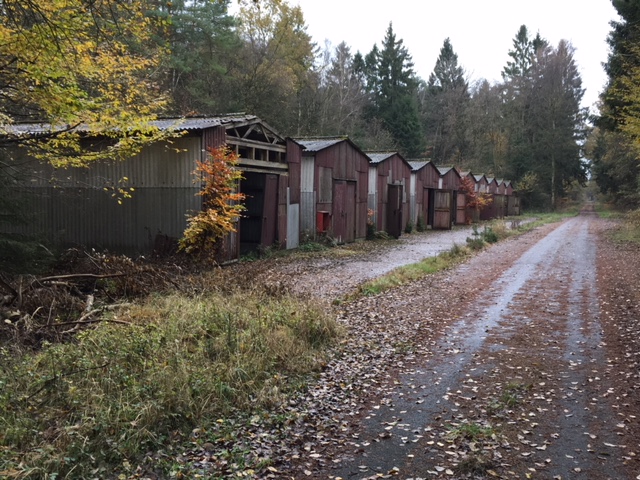 Some older fellow citizens are still familiar with the history of the ammunition facility in Lübberstedt-Bilohe called “Muna”. But lots of other people who are new to the community, or simply younger, are not aware of this past. They are acquainted with the history of our nation, they also know about the concentration camps during the Third Reich, but: So close to us? Sheer disbelief is the first reaction when hearing about the small village of Lübberstedt being the  site of a concentration camp. But it is true indeed. During the period of National Socialism there was a satellite camp of Neuengamme concentration camp between the villages of Axstedt and Lübberstedt.  Forced labourers (mainly women) who had to eke out a living under unworthy conditions were imprisoned here. Some of them perished. They are commemorated at the cemetery in Lübberstedt.

After World War II, the German Federal Armed Forces took over the site of the former ammunition facility, the “Lufthauptmunitionsanstalt” as it was originally called. After its closure the grounds have been accessible again but not open to everyone. The future of this area is still in the planning stage, a nature reserve is being thought about. Already twenty years ago, committed and historically aware  citizens  founded the association “Arbeitskreis Muna Lübberstedt e.V.” which takes a close look at the history of the “Muna” and which brought buried knowledge to light again. The initiators -especially Volrad Kluge (who unfortunately died prematurely), Barbara Hillmann and Erdwig Kramer – rendered great services to this task. The results of their inquiries (supported by Thorsten Gajewi and Rüdiger Kahrs) were published in 1996. The book is called “Lw. 2/XI – Muna Lübberstedt – Forced Labour for the War”  and has been published by “Edition Temmen”.

But the publication of this documentation did not mean the end of the association´s work. Its  members found it equally important to show people the actual places of this ignominious part of our nation´s history. With a great amount of initiative Erdwig Kramer and his fellow members managed to get a permit for guided tours of the area. For a couple of years these tours have been offered once a month. They are very popular and their aim is to raise an awareness for this aspect of Germany´s history so that such devastating errors will not be repeated.  Also, the documentary-type production by the theatre group “Das letzte Kleinod” (“The Last Gem”) staged on the site of the “Muna” contributed to this. In order to see the play, lots of citizens from the villages of Axstedt and Lübberstedt saw the grounds for the first time. They expressed how deeply impressed they were afterwards.  The sensitive presentation had given them an insight into what was happening in those days. This was continued with the expertly guided tours by Erdwig Kramer and his team. With each building the visitor is given an idea of what was happening behind these walls.

Nowadays, however, the ravages of time gnaw at the historic building stock. It is foreseeable that these buildings soon will no longer exist. Thus, it was important to record the current status and so the idea of a cinematic documentation was born. Already some years ago, people began to film buildings, streets and bunkers. The association “Arbeitskreis Muna Lübberstedt” got a lot of material from the company “Skylab Studios” in Rastede which was far too extensive for a presentation. Now a new work step began: the most important had to be chosen. However, it was also necessary to embed the material in the historic context and not to disregard people´s lives in the two villages of Axstedt and Lübberstedt. This offered the new possibility to let the contemporary witnesses speak and thus to preserve their important words.  The association regards the work of Skylab Studios as highly successful. There is now a 30-minute film which tells the history of the “Muna” and which can also be shown to school classes. For a voluntary donation of 5, – € the DVD is available at the florist´s “Blumen-Müller” in Lübberstedt, at the hairdresser´s “Schnibbelecke” in Axstedt and at the bookshop “Schatulle” in Osterholz-Scharmbeck.

Recently, a large information board points out that the former ammunition depot is now to be converted into a new use. The “DBU” (short for “Deutsche Bundesstiftung Umwelt”) which is a foundation for nature conservation has taken over the site. Since October 1st 2017 the whole area officially belongs to the property of the DBU which is now responsible for its care.

If you have any questions, please contact us via e-mail: muna@vodafonemail.de

From April to October you can visit the site of MUNA Lübberstedt on the third sunday of every month.

Our MUNA Information Flyer you will find here: muna-folder_en1.pdf

Roslyn Eldar´s journal of her trip from Melbourne, Australia to Lübberstedt in 2018 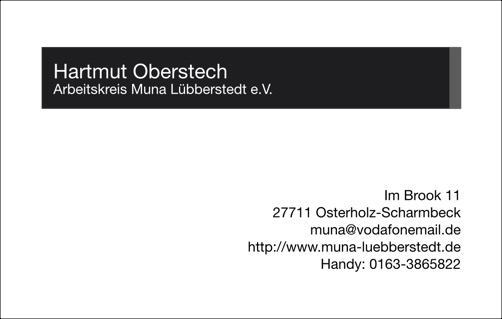